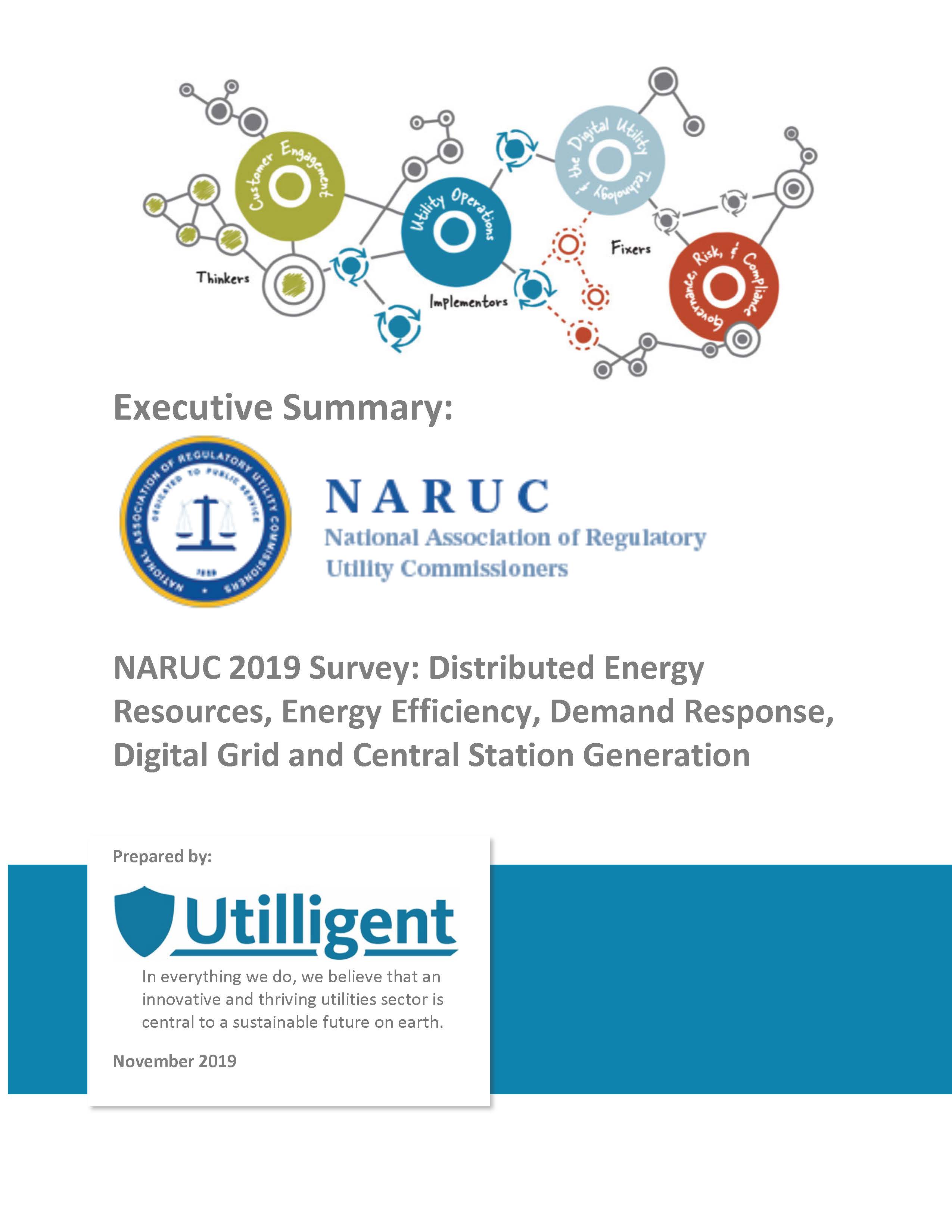 The National Association of Regulatory Utility Commissioners president, Nick Wagner, in partnership with Roy Ellis at Utilligent conducted this NARUC membership survey. The survey was conducted between March and May 2019, with follow-up questions and answers through early July 2019. Analysis was conducted in July and August 2019.

Some responses represent a consensus view, others were the perspective of one commissioner or member of the staff. Opinions expressed without attribution are those of the authors and do not necessarily reflect those of the participants or of NARUC.

Results and Analysis Methodology
The raw data from the survey has been provided to all survey participants. This document contains our high-level analysis of the survey responses, including an effort to frame each issue and explain our findings. Additional analysis has been developed to frame the issue at the heart of each question and place the findings from the survey in a broader industry context. This deeper dive can be downloaded at: www.utilligent.com/publications

Summary of Survey Findings
Survey participants agree, for the next five years, installed capacity will increase on both sides of the meter, with an overall percentage of growth advantage on the supply side. For example, Colorado projects a 275% increase on the supply side and 85% increase on the demand side, while Florida projects a 500% supply-side and a 300% demand-side growth. Illinois project “significantly” higher than 40% growth on both sides of the meter, while North Carolina projects greater than 70% growth on the supply-side and 11-20% on the demand side. Certainly, some element of the drive behind this five-year increase is the race to take advantage of disappearing Investment Tax Credits (ITC), but the increasingly competitive nature of solar, even without the ITC, could bode well for long-term growth.

Overall, the survey respondents show that net metering has succeeded, but as California, Arizona, and Hawaii demonstrate, some states are moving away from binary solutions to more market-informed tariffs. Time and location of generation and consumption will become increasingly important, especially where traditional investments are avoided or delayed because of DERs. Ultimately it will be market-driven signals (price) that should and will drive the distributed generation market.

Central station generation will continue to be the primary source of electricity for the next decade, and likely beyond. While much could, and probably will change in ten years, it’s doubtful that distributed generation can, or will, achieve the economies of scale found in the central station approach, even if both approaches are mostly renewable in nature. If the goal is cleaner and greener, regardless of generation ownership, then central station may be the better means to achieve that goal.

Most commissions consider the ability to manage demand and provide distributed supply to be viable components for use in resilience planning. Some commissions include these distributed resources in formal planning activities, but survey comments suggest many commissions assume they are included rather than know for certain based on formal planning processes. To that end, some Commissioners note that Integrated Resource Planning (IRP)/Distribution Resource Planning (DRP) activities are maturing and may include these options in the future. The use of these same resources to create Non-Wire Alternatives (NWAs) for resilience purposes is probably less widely understood and supported, although some specific recent application can be found that suggest these alternatives are being considered.

A number of commissions support aggregation for the provision of bulk power system-level grid services such as capacity, energy, and ancillary services. The difficult part is how to include, value and regulate these local services in the wholesale market. This is a very complex issue that goes to the heart of the industry evolution. And while the issue more directly and immediately impacts states in organized markets, that appears to be changing, especially where storage enables DER firming. Many of the issues highlighted here are far from resolved.

The commissions in California, Connecticut, Hawaii, Idaho, Illinois, Minnesota, Oregon and the U.S. Virgin Islands, all note varying stages of development for DER locational valuation. The issue is driven by penetration rates (especially solar) or an overall legislative push for higher percentages of renewables. The locational flexibility of DERs ultimately creates the opportunity and matching this flexibility with grid opportunities is the goal. It is a logical evolution from net metering, but it may not be seen as such. In most cases, this evolution is driven by what appear to be conflicting goals. There is a need to put the brakes on increasing levels of generally undirected DER penetration to avoid circuit overload and cost shifting, while there is a desire to press the accelerator on organized, high-value, targeted deployments of DERs. Based on feedback in this survey, States that are considering locational value are trying to do both.

The near real-time view of the grid at all levels with the detailed data required to make informed decisions is simply not available in the US, outside of a few circuits in a few states. A true bulk power system view does not exist in the US. A significant amount of the necessary data to understand where DERs might be deployed most successfully, is probably captured today, but provision of that data is not yet standard practice and analysis of that data for DER valuation is certainly not possible without the necessary technology. Several states are taking steps to address this knowledge gap, most include technology as an early step. While the starting point to develop the necessary knowledge is probably the deployment of distributed energy resource management systems, the catalyst for these technology investments is probably higher levels of DER penetration or legislative urgency.

We found a common regulatory theme regarding data privacy. Customer-specific information is private, must be secure and cannot be released without customer consent. Third-party access must be via a formal, structured process that includes this customer consent. Sharing aggregated consumption data is more complicated, requiring additional security considerations. Green Button, using industry and national standards for the data collection, approval and sharing process is a good model. These widely accepted national standards are likely to be required as the need for data sharing increases. For now, this is a state-by-state regulatory effort.

Most respondents do believe some level of cost shifting is occurring. The extent to which this cost shift has increased rates is less clear, however, comments on this point indicate concern that this may only be unclear because low penetration rates are not sufficient to create significant cost shifting. This issue could lead to a more wholistic approach to cost shifting that results in a true value of DERs model and an agreement on what grid and operating costs are unavoidable. This issue could be the next big regulatory thing, thanks in no small part to battery storage.

We found overwhelming support for inclusion of DERs for resilience, not just reliability, although these two concepts are conflated. In most states, legislative and regulatory activities are underway to create or refine laws and regulations that increase the opportunity for DER participation. The word resilience is mostly indistinguishable, at this point, from the policies goals associated with the concept of reliability. Resilience like reliability is ultimately about making sure the lights are on. Answers to this survey question suggest that regulators recognize that DERs will increasingly contribute to that goal.

While the survey found that the vast majority of states consider their interconnection queues to be well-managed with most deadlines generally being met, it will be increased DER penetration that will stress-test current processes and force improvements. This is a growing pain in which much can be learned from states with a high penetration of renewables and those in wholesale markets where interconnection processes have been formalized for years and are generally more tested and refined.

Automated Metering Infrastructure (AMI) has replaced roughly half of the meters in the U.S., but the pace of deployment appears to have slowed in the last few years. Just over half of the respondents to this question suggested that it is too soon to tell if these AMI investments will benefit customers. Only 26% found that their AMI deployments were net positive, but none of the respondents selected net negative, which seems to reinforce the idea that the jury is still out. The overall story might yet be a very positive one.

To a point, the low hanging fruit for load reduction is cost-effective EE. Most states have some form of EE program, since they tend to directly reduce customer costs permanently. Assessing the cost-effectiveness of each EE program alternative is the essential first step in proper program development. Statutes and regulations that provide regulatory flexibility, that remove the associated load reduction revenue disincentive, and replace them with specific goals, incentives and penalties, appear to be the winning combination for successful EE programs.

Most states see some initial value, even necessity, for utility participation in TE. At the most basic level that support is about safety and grid reliability, but it can also be driven by a “build it and they will come” consideration that encourages adoption. There is significant regulatory interest in utility involvement, but not in every aspect and not everywhere. The survey responses suggest that most Commissions have made no decision on the appropriate role for the utilities. Some core policy decisions are required, but many states are waiting for penetration rates to increase, along with customer demand for charging infrastructures. The DC commission approach to ratebase treatment for make-ready, is an approach that keeps all players in the game while policy goals are refined.
The pace of Electric Vehicle (EV) adoption and the pace of public charging infrastructure rollout are clearly linked. While early adoption can force the issue, the process once begun follows a generally straight line: 1) policy, which provides regulatory directions and market incentives 2) pilots that define regulatory, technical and market needs 3) grid readiness which adapts the infrastructure to support expansion, and hopefully, to optimize the investments. Based on responses to this survey, the vast majority of the Commissions are between steps 0 (N/A) which means they are not focused at this level of detail and step 2 (pilots).

There is no state in which the issue of the future utility business model has been completely decided. Most states are testing some elements of a changing business model, through performance-based rates or similar revenue-impacting mechanisms, but it will take time for revenue impacting events and responses to surface the best model for a given state. Survey responses suggest that for now storage, charging, DER installation, and maintenance services are products and services of interest and potentially those that can be provided by the utility. Earlier survey questions related to transportation electrification suggest a similar interest in potential utility offerings. This is a good list, but more things may be added, especially behind the meter.

The adoption of DERs varies greatly by state, but at a certain level of penetration, every state must address the same basic issue. Who is ultimately responsible for distribution grid oversight and control of operations, safety and security? California and Hawaii are at the forefront of this adoption evolution; California through both penetration and some heavy lifting on interconnection rules and smart inverter standards, while Hawaii, as a true energy island seeking a 100% carbon free future, will likely provide a front row seat to the regulatory challenges of this evolution.

Most Commissions have not considered the issue of capital treatment for cloud computing. Those who are considering are the ones trying to work within or around the traditional utility business model to develop incentives for change that address utility business concerns. Increasingly, grid software and the expertise required to manage and update it will be remote, cloud-based and cheaper than internally developed and/or deployed technology. This may not matter to most regulators today, but it may in the future.

The full detailed study based on the survey findings can be downloaded at utilligent.com/publications.